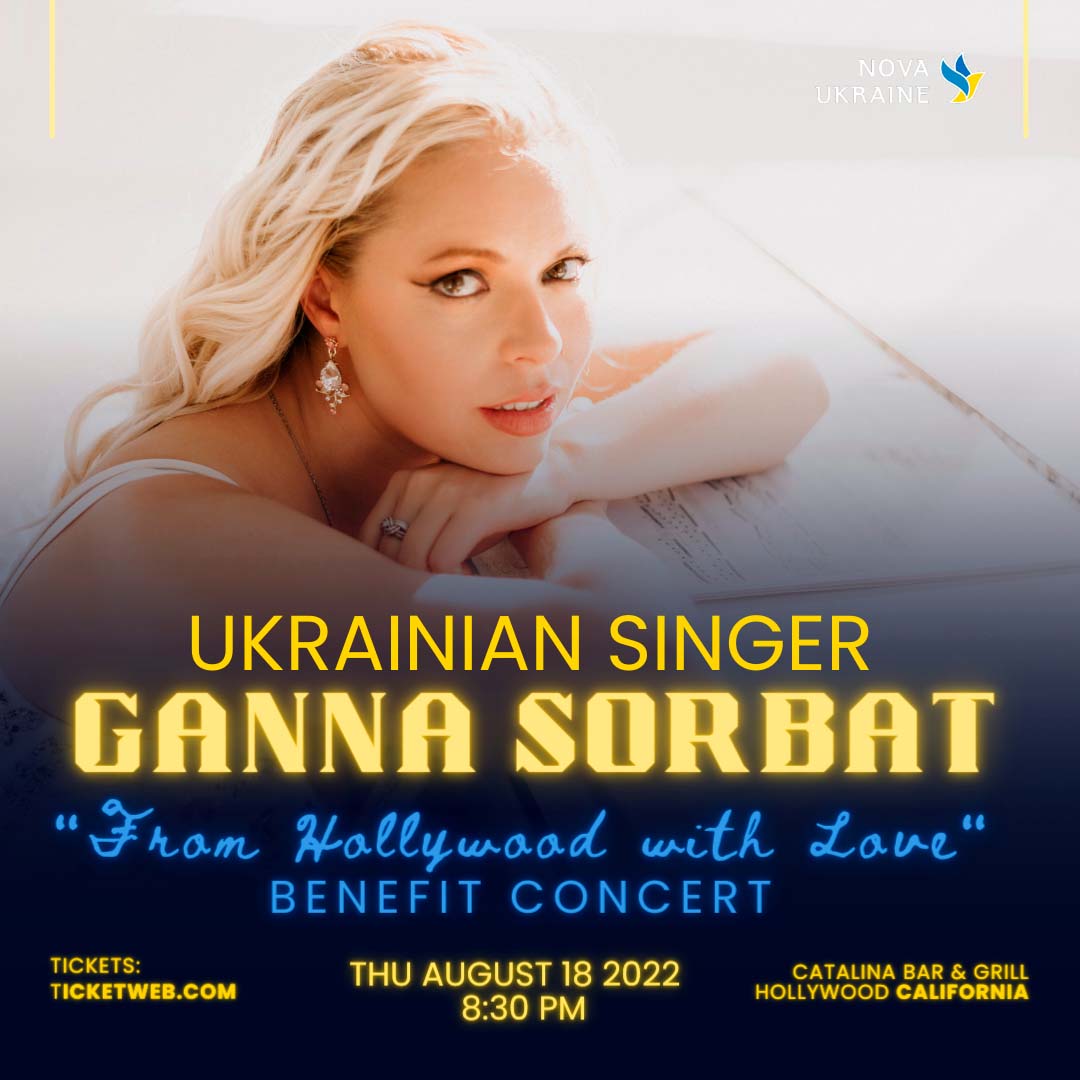 Dear friends, I’d like to invite you to my upcoming “From Hollywood with Love” benefit concert at the legendary Catalina Jazz Club in Hollywood in support of our beloved Ukraine

Doors are open at 7 PM

Tickets are on sale now: https://cutt.ly/0ZGMuWJ

Ganna Sorbat is an award-winning composer, singer, and pianist, originally from Kharkiv, Ukraine. Ganna began playing and composing music at the age of 7. She has performed as a singer and pianist with music groups and orchestras throughout Europe, the Middle East, and the United States. These include concerts with the Rolling Stones, George Fenton, Morgan State University Choir, Tommy Tallarico, Russell Brower, Gerard Marino, UAE National Symphony Orchestra, and Salt Lake Pops Orchestra. Ganna recently co-created a new arrangement of the UAE’s National Anthem.

Sorbat released her debut EP album called “Revelation” in 2019. She’s currently writing music for film and TV and performing live in a concert in California, Utah, and Texas. She’s producing new songs with her music group Phoenix Roar which is the joint musical venture of Ganna Sorbat and Reuven Herman, two professional LA-based musicians with roots in Ukraine and Israel, respectively. They join forces to bring forth a contemporary epic cinematic sound, exploring topics of life, death, and rebirth through art, music, and science.

The current horrific war in Ukraine (with heavy fighting currently underway in Ganna’s hometown of Kharkiv), could not be more relevant to the lyrics of her music group Phoenix Roar’s recent single release The Renaissance:

“Would you help me continue my fight?

Would you help me if there’s no more hope inside?”

“We sincerely believe in the power of music to inspire peace and harmony, and we dedicate The Renaissance to a quick and just end to the fighting in Ukraine, and the world beyond.” – Ganna Sorbat with Phoenix Roar

Artist proceeds and concert proceeds will benefit the non-profit organization Nova Ukraine which has been providing humanitarian aid to Ukraine, they are also providing limited assistance with locating and reconnecting family members who have been separated from their loved ones.