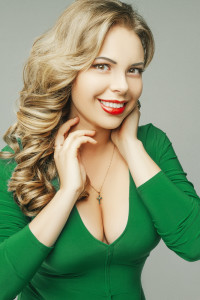 Background
Ganna Sorbat is a classically trained dramatic soprano singer, an accomplished pianist, songwriter, music producer and film composer. She is originally from Ukraine, where education is highly valued and encouraged. Ganna is well versed in her knowledge of music theory and music history. Her talents and skills also include arranging music, teaching music, and orchestrating music productions and events. Needless to say, Ms. Sorbat is a recognized and much sought after award-winning composer.

Early Life
Encouraged and inspired by her parents, musically inclined as well, Ganna Sorbat showed a great interest in music as a young child. Her love of fine arts, serious attitude for the love of music, consistency, and great ability to work hard were cultivated by her parents and teachers which essentially helped Ganna to make progress in musical development and choose her musical course in life. She listened to, and was influenced by her mother, Svetlana, who played Beethoven, Mozart, and Chopin’s waltzes, Ukrainian and Russian folk songs and famous movie songs. Fascinated by the movie songs and TV show songs, one day young Ganna sat down to the piano and played by ear the melody to a beautiful Italian song from the TV show ‘‘Edera.” That moment revealed her talents, changed her world, and began her musical ascent.

Her parents enrolled her at the music school where she studied piano playing, writing music, and solfeggio frequencies. Her teacher, recognizing Ganna’s extraordinary skills, recommended a more advanced school, and her parents then
enrolled her in Lyceum of Arts No133, Kharkiv, Ukraine, a special school for talented kids. Continuing her earlier studies, she also sang in choirs, learned the history of all arts, including music, and competed with other students in composer’s contests which garnered her many diplomas. She speaks Ukrainian, Russian, and English which she utilizes in her music.

Education
As a student at Musical College and the University of Arts, Ganna performed in concerts, international contests, and festivals, including IV International Competition for Young Composers “Maestro”, Simferopol, 2004, the Ukrainian Literary-Musical Contest “The Eighth Note”, Kiev, 2008 and National Festival “Music of the Young”, Kiev, 2011 among others. For her Solo Recital, the program included works of A. Arenskyi, F. Amirov, V. Zolotukhin, and featured Ganna’s own original works. The concert was conducted in the concert hall of the Kharkiv National University of Arts in March 2009. Her diploma work was a Symphony Poem for Orchestra. She earned her Bachelor degree as Composer and Teacher of Music.

Ganna credits her teachers, who, during her studies at B.N. Liatoshynskyi Kharkiv Musical College (2002-2006) and at I.P. Kotlyarevskyi Kharkiv State University of Arts (2006-2010) played a significant role in Ganna’s not only becoming a musician, but also a personality. Under their excellent tutelage, the future composer mastered the arts of performance, improvisation, composition, harmony, polyphony, solfeggio and instrumentation.

Ganna Sorbat was one of many young and talented graduates in the class of composition and instrumentation of Professor Vladimir Zolotukhin, People’s Artist of Ukraine, Master of Music, a great artist and a person with rare gifts at I.P. Kotlyarevskyi Kharkiv State University of Arts, and the greatest composer of Ukraine.

Ganna’s recognized and multi-awarded talent as a composer is well known in Abu Dhabi. She worked at an established studio there and composed and arranged music for famous artists like Mansour Zayed, Maria Nedelkova and scored music for Film, TV and other media. In 2013 Ganna co-created a new arrangement of the UAE National Anthem which was well received and widely broadcasted throughout the Gulf countries.

She is making her presence known here in the United States as she continues to share her incredible talents and skills by performing at various venues, events, festivals, and special tributes. Ganna acknowledges and is grateful to each of her extensive and prestigious list of teachers, coaches, and professionals who imparted their knowledge and invested in her. But now she is focused on creating a unique musical and art world by Ganna Sorbat. And having already recorded three CD’s of diverse, original music, she is well on her way to her dream. She is quoted as saying “Now your heart is free, just open it for love.” She invites us to listen to those lyrics in her song with the same name “Now Your Heart is Free.”

For more info about this artist and for booking, please visit the website at  www.gannasorbat.com